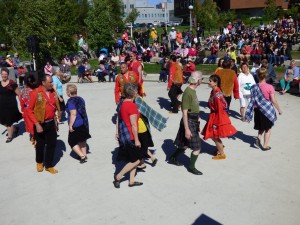 Dances of Rupertsland is the story of the origins of Métis dance and music and culture. When the Europeans first arrived to North America they seen the vast riches of the land and the fur of the animals knew they had to deal with the first people of this land. Which was the beginning of the trade era when First Nations people first seen the European weapons that could be easier to hunt game and protect themselves and the cost for these weapons were the game they had hunted for years and the fur trade began. Not only did the economic partnership bring these two cultural groups together, the fascination of the others way of life brought the two together. Many intermarriages brought together the way of life they shared at that time the hunt and the preservation of the fur and hides of the animals for the sales of top quality products for the European markets. As the new families grew from the joining of these two cultural groups a new people of the land was born (half-breed) Métis people, the first people of the land were building in great numbers and started new communities in the west bringing a new spirit to the land. The children of these new families carried the strength of the two cultures they were born into, the ability to speak two languages their parents spoke, the knowledge of hunting and treating of furs and hides and the respect for the cultural values of music and dance to celebrate the building of new communities and a new culture. Because the men were the heads of the families it was important for them to teach their children the culture they grew up in back in Europe and many did bring their own musical instrument usually a fiddle and they taught them the dances of their land. As the Métis communities grew in the west so did their culture many of the gigues, reels and double stepping steps and music brought the communities together. Music and dance was shared between the Métis and First Nations and brought them together in many gatherings. There has always been a respect between the two cultures and Métis were lucky to be able to practice both cultures as they were from both worlds. Métis people created their own dance that reflected their cross cultural values and dances like the Red River Jig, the Duck Dance, Drops of Brandy and Reel of Four were created from respect of both of our cultures. In the Red River Jig many of the changes in the dance came from our First Nations heritage such as the (cross over step) which reflects the steps of the Grass Dance and the fast high stepping from the Fancy Dance which are part of the pow-wow dance competition. When you take in tonight’s performances you will see many of the similarities of our Métis dances in our guest’s presentations of their cultural music and dance. We are all one people when it comes to our celebration of dance music and pride, this is a good time for our cultures to come together as we are celebrating National Aboriginal Day this week. Dances of Rupertsland is coordinated by the Edmonton Métis Cultural Dancers who are celebrating their 30th Anniversary as a community group. The Edmonton Métis Dancers have always promoted the true heritage of Métis dance and music.

The Edmonton Métis Cultural Dancers were formed in the fall of 1985, with young people who were taking dance classes at the Canadian Native Friendship Centre (CNFC), Edmonton. The cultural coordinator Georgina Donald though it was important for young people to learn their culture in a fun way and in a way they can express themselves through the arts. At the time most of the original dancers had taken lessons for over a year, which were taught every Sunday afternoon for two hours between September and April. Dance instructor, Moise White, picked ten of the kids to advance to a higher level of dance. During the first year of their lessons, they were taught the basic steps and patterns of the different Métis traditional dances. They were also taught the theory of the dance, which include traditional music, timing and history of our culture. Over the years, the dancers have been promoting all of the traditional Métis dances, therefore reflecting the cultural heritage brought by our mixed ancestry (the French, Scottish, Irish and First Nations). Traditional dances include: the Duck Dance, Reel of Eight, Drops of Brandy, Reel of Four and the Red River Jig. They were also taught several first changes and breakdowns, with all of the square dances being described by a square dance caller. The group has also learned other show dances that profile their stepping ability including: the Orange Blossom Special, Broom Dance, Sash Dance and the Cotton Eyed Joe. Currently the group is made up of three generations of the Donald Family, including grandfather, sons and daughters and grandchildren.